It was announced last week that Travis Kalanick, Uber's former CEO and founder, would be selling 29% of his shares in the latest round of funding by SoftBank, a move that will net him around $1.4 billion. While this may seem like a founder finally getting paid after 10 years of grinding, the timing seems very suspect and may foreshadow the decline of the world's most valuable startup. 1. SoftBank's investment comes at a 30% discount, valuing Uber at $48 billion, down from $68.5 billion last round.
Sure there are limited options for cashing out of a startup so, if you need the money, do it when you can. But Uber's new CEO, Dara Khosrowshahi, stated plans for the company to go public in 2019.
If you're confident in a company's strategy and prospects going forward, why not wait for the IPO and/or higher valuation?

2. Kalanick offered to sell up to half his shares.
Kalanick is selling almost a third of his shares for over a billion dollars. Maybe he wants to but a few toys, but do you need an extra billion dollars? (50% of his shares would be worth approximately $2.4 billion).
He may be short on cash after not taking much of a salary for a decade, but why offer to sell so much when even 1% would be more than enough to sustain him?
And again, why cash out if you think it'll be worth more in the future?

2b. Benchmark and Menlo Ventures have also expressed interest in cashing out.
This is a bit different because both were early investors with shareholder interests to consider. Taking almost ten years to get a return on their money, considerable as it is, pushes the limits of how long most VCs want to wait.
But again, what's another year to wait for the IPO, if Benchmark and others believe it would push the valuation even higher?

3. Kalanick's fight to retake control of Uber has gone silent. After a wild attempt to make a Jobs-ian comeback and going rogue by appointing two directors to the board, little has been heard of Kalanick.
This is likely in part because he did not wanting to disrupt the SoftBank deal, but he may have resigned himself to a nominal role at the company.
Of course, he may be laying low, trying to plot a comeback, but SoftBank's investment significantly reduces his influence, as we as that of many other shareholders, and makes it much harder to do so. 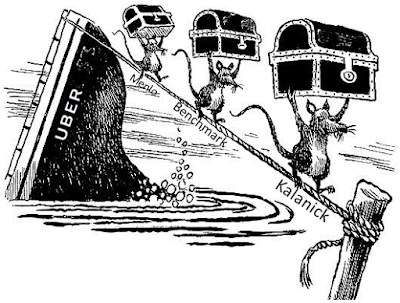 This all points to Kalanick, and others, believing in a poor outlook for the future of Uber. The days of hypergrowth and expansion are over. Maybe things improve a little, but they're cashing out when the valuation is at or near the new peak.

After reports of Uber's awful, male-dominated culture surfaced, most of them pointing to Kalanick as the ring-leader or fully compliant to events, I felt almost immediately negative on the company's future.

As reports of sketchy business practices continue surface, my views are even more solidified and it will be hard for the company to shake that perception to the public. Perhaps more importantly, is the negative culture so ingrained into its employees and processes that you can't burn it all out?

Even after a Arianna Huffington-led crusade and replacing Kalanick with Khosrowshahi at CEO, righting the ship is a monumental task that may not be possible.