For the second entry to my Crowdfunding Product Review series, I thought I'd highlight a product that looks technically sound and I'd actually want.

The Scorkl is basically a miniature scuba tank that you can refill via larger tank or with a hand pump.
It lasts up to ten minutes and divers can go a recommended 10 meters maximum, if you are scuba-trained, or 3 meters for everyone else.

1. Handheld
A couple of the biggest problems with scuba diving are all the advanced planning needed and extra gear you need to haul around: tanks, regulator and hoses, weights, etc.
By creating a compact solution, divers are able to hit the water at a moment's notice with little more than a single back of gear.

2. Available hand-pump
Unless you are in a popular diving spot, finding a place to refill a tank can be a chore.
Having an available hand pump to recharge the air tank is a great, portable option. It also saves money in the long-run by not having to pay for your air.

While this doesn't allow for air mixtures (Nitrox, etc.), you don't require them if you stick to the recommended depth limits and, unless you're doing dozens of dives, you won't exceed any time limitations.

3. Pressure Gauge
This is the weak point in the design of the product.
While it's helpful when filling the tank, it's difficult to see the gauge when the mouthpiece is in your mouth.
You could take it out of your mouth to check, but that's a huge hassle and inexperienced divers may have issues re-inserting the mouthpiece without taking in water.


Originality:
Adding this section to reviews because, while the Scorkl is cool, I remembered seeing something similar a while back.

That product: Spare Air, which was created over 35 years ago. 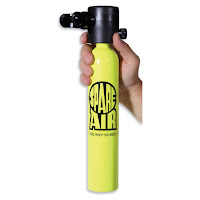 Looking at Spare Air again, the similarities are uncanny.
I'm not sure if it is the same manufacturer who is just rebranding and capitalizing on crowdfunding or an enterprising person who realized any applicable patents will have expired.

An equivalent Spare Air model is priced at $320, so $199 is a relative bargain and even at full MSRP, you'll save $25 compared with the original.

The more expensive option is the hand pump, which costs an additional $199. This seems excessive for something that looks like a bicycle pump, but it's a multi-stage compressor as well, which definitely adds cost to manufacturing.
I'm sure they're making a good profit off the $199 pricing, but for those who want to dive in more remote areas without tanks or shops nearby, it may be worth paying that premium.


Summary:
As I said before, the Scorkl is a product that looks cool and one I'd actually want.
While not as original as I initially thought, the crowdfunding pricing is cheaper than its projected MSRP and significantly less than the original Spare Air.

I live in New England with ice-cold-Atlantic water almost year-round, so I wouldn't get much use out of it, but for people who live in warmer climates (or have a drysuit), this is a nice alternative to the sometimes significant prep time for a full diving excursion.
Additionally, it may save some money in the long run if you typically do shorter, shallower dives anyway.


Thoughts on the Scorkl? Would you buy it?
Own a Spare Air? I'd love to hear your thoughts/comments!