I recently started listening to the "Internet History Podcast" and Chapter 1, naturally, covers the "first" web browser, summarizing the history of Marc Andressen and the creation of Netscape. 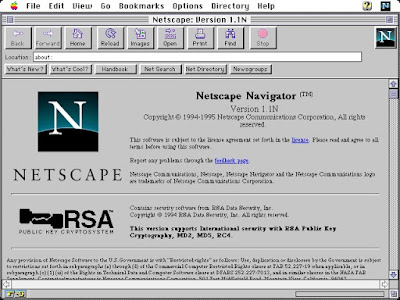 It got me thinking about what a unique time it was growing up at the same time as the internet and some of my first interactions.

The first was purely observational, watching someone at the public library typing in a console of pure green-illuminated text. I don't know how (I probably heard about it somewhere), but somehow I knew he was accessing information beyond the contents of that machine.

My first experiences with a graphical internet and browser were probably around 1995. While the first couple times signing on are a bit fuzzy (once was at school and another was at my friend Zack's house, in which order I can't remember), I very clearly remember the third time since it was the first time I went through the process myself.

It was in Mrs. Hayes's 4th grade on a computer donated to the school. Zack and I had previously gone online at his house after his dad had shown us and we wanted to show our other friend Matt. Up until that point, I had played with graphical computers, but only executing local applications. Having the multi-step process of connecting the modem then launching the browser seemed so complicated.

I have no idea what we did once we got online, but the process of getting there is what stands out the most.
As a not-quite digital native, I'm still amazed by certain aspects of internet technology and can't quite imagine what it would be like to grow up today.


Any defining stories of internet/technology from your youth?
I'd love to hear about them. Please respond in the comments below!

Can Walmart Out-Kick Amazon Down the Last Mile?

Walmart recently announced that it will offer discounts to orders that are placed online, but picked up in-store.

I thought this was an interesting, and very smart, decision for a few reasons:

1. Drives traffic (and sales) to stores
Browsing dynamics differ greatly between online and in-person shopping. Recent studies even show more shoppers actually preferring and spending more in-store. However, sometimes the hardest part is getting people in to your store. Once in, impulse often takes over and customers end up buying more than they came for.
By encouraging customers to pick up packages at their stores, Walmart is increasing traffic and, likely, sales.

2. Continues use of physical stores
Walmart has over 5,000 brick & mortar stores in the United States. While they are rapidly growing their e-commerce operations to compete with Amazon, their strength is still their physical presence and a significant point of differentiation. Continuing to support, rather than taper off, their physical stores will enable Walmart to leverage them as both retail and distribution hubs.
(Side note: Staples has tried something similar, even renting part of their stores as co-working space to monetize excess floorspace stores. However, I believe success has been limited).

3. Utilizes existing networks
Walmart already has thousands of trucks moving products from warehouses to stores daily. While it adds complexity, adding a few boxes to a truck is negligible in terms of additional shipping costs per individual item.

Most importantly:
4. Solves the "Last Mile" problem
Okay, maybe it doesn't completely solve the Last Mile problem, but it does lessen the costs and complexities associated with it.
There is an intense race to find the most cost efficient way to transport packages the last leg of their journey and significant research has been done in the past few years regarding Last Mile logistics.
Companies are experimenting with ways to reduce costs and improve delivery times hoping to be the first to find the solution. Two of the most notable being the use of existing third-party networks and drones, with Amazon investing heavily in both, as well as in its own network of delivery trucks and vans.

I'm fairly certain Walmart's attempts to bring customers in-store won't be the ultimate solution, it makes sense and helps to alleviate the cost and some of the problems associated with delivering to individual homes, while utilizing some of their existing assets.


Thoughts on Walmart's new strategy or other logistics?
Who will win the race down the finish line to finding that disruptive model that will change the Last Mile for everyone?
Posted by NW at 9:42 PM No comments: