IPO Market Comes to a Standstill

"A frigid January for initial public offerings is pointing to a hard winter for fledgling firms seeking to go public.

There were no U.S. IPOs in January, the first monthlong drought since September 2011, when the eurozone crisis was in full swing and the debt rating of the U.S. had just been downgraded, according to data provider Dealogic. Investors and analysts attribute the dearth to the global stock-market rout of the first two weeks of the year, which signaled a broad retreat from risk by investors.

If sustained, the reversal threatens to send ripples through global financial markets. Many analysts and traders view a healthy IPO market as a necessary precondition for a sustainable advance in the broad stock indexes." 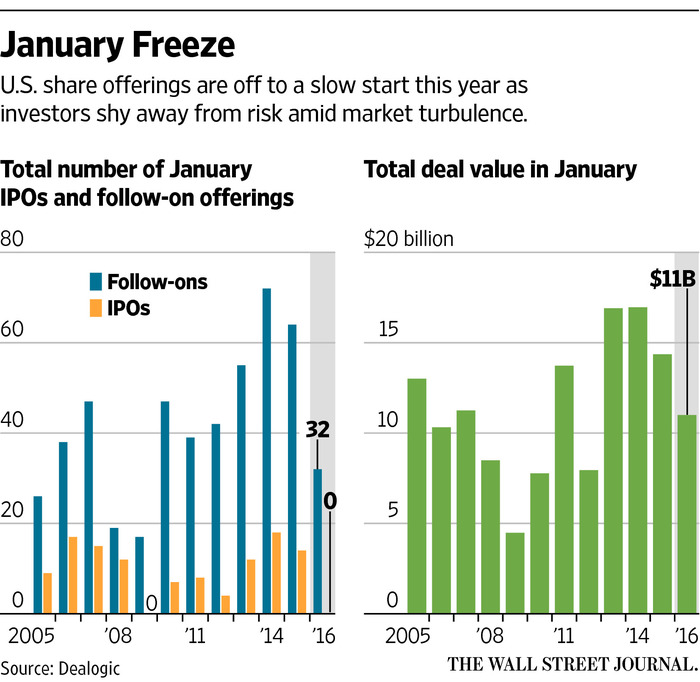 The bubble continues to deflate...

"WHEN DUANE KNUDSON, a professor of kinesiology at California State University, Chico, looks around campus at athletes warming up before practice, he sees one dangerous mistake after another. “They’re stretching, touching their toes. . . . ” He sighs. “It’s discouraging.”

If you’re like most of us, you were taught the importance of warm-up exercises back in grade school, and you’ve likely continued with pretty much the same routine ever since. Science, however, has moved on. Researchers now believe that some of the more entrenched elements of many athletes’ warm-up regimens are not only a waste of time but actually bad for you. The old presumption that holding a stretch for 20 to 30 seconds — known as static stretching — primes muscles for a workout is dead wrong. It actually weakens them. In a recent study conducted at the University of Nevada, Las Vegas, athletes generated less force from their leg muscles after static stretching than they did after not stretching at all. Other studies have found that this stretching decreases muscle strength by as much as 30 percent. Also, stretching one leg’s muscles can reduce strength in the other leg as well, probably because the central nervous system rebels against the movements."

First learned about active stretching while on the track team in college... The benefits weren't explained, but I definitely felt better after doing them rather than touching my toes.
Check out the article for three solid stretches. The Scorpion is my favorite, even if you get stares at the gym.

Why Silicon Valley Should Bring Unsexy Back

"Neckties embedded with QR codes. Pants that make drum noises. “Uber for medical marijuana.” These are just a few of the goofy startup ideas that have cropped up in Silicon Valley in recent years.

I can’t be the only one who’s disappointed with this. The Valley is the birthplace of game-changing innovations, like the microprocessor and the PC. It’s home to enough brainpower to take on the biggest problems of today, like world hunger and climate change. So why, in 2015, was it so myopically focused on silly wearables and more efficient pot delivery?

To me, the answer seems like an obvious one. Like middle-schoolers at a high-school dance, startup founders are trying too hard to be cool. And it’s not only hurting the world — it’s hurting the longevity of the entire tech industry."

Nothing revolutionary, but interesting. I think this thinking is further contributing to the deflation of startup valuations. Investors aren't just looking for the next big fad anymore, they're looking for companies and ideas that will actually create "value" in the long-term.

"British actor John Cleese—best known for his roles in the Monty Python films—joins the list of celebrity comedians perturbed by the utter rejection of so-called offensive humor on college campuses. In a recent video for Big Think, Cleese lamented that political correctness was depriving society of a sense of proportion. “Then, as far as I’m concerned, you’re living in 1984,” he said.

A transcript of his remarks:

I’ve been warned recently, don’t go to most university campuses because the political correctness has been taken from being a good idea—which is, let’s not be mean particularly to people who are not able to look after themselves very well, that’s a good idea—to the point where any kind of criticism of any individual or group can be labelled cruel. And the whole point about humor, the whole point about comedy—and believe you me, I’ve thought about it—is that all comedy is critical. Even if you make a very inclusive joke—like, How do you make God laugh? Tell him your plans—that’s about the human condition, it’s not excluding anyone, it’s saying we all have all these plans that probably won’t come and isn’t it funny that we still believe they’re going to happen. So that’s a very inclusive joke, but it’s still critical. All humor is critical. If we start saying, oh, we musn’t criticize or offend them, then humor is gone, and with humor goes a sense of proportion, and then, as far as I’m concerned, you’re living in 1984."