The Fast-Food Wars are Alive and Well

There was a recent article in Inc. about McDonald's resurgence led by their "breakfast anytime" campaign and rapid experimentation with different foods. (Kale salads, anyone?)

This rejuvenation, has put McD's back in the mix where it had, up until recently, lost significant market share to Burger King and other chains like Arby's and Wendy's.

The rest of the Inc. article did not provide other examples or reasoning for McDonald's comeback, but did make this observation regarding health-consciousness (or lack there of) that I thought was funny:


"I conclude, therefore, that Americans aren't necessarily trying to lose weight. They simply in love with sausage and want to eat it all day."


While the author starts to get a bit judgmental of others' food choices, the deeper point is interesting. Despite the crusade to place blame and accountability on the food & drink companies, instead of the individual, people still choose to buy fast food.

Unrelated to McDonald's recent success, but still in the world of fast-food, was this funny exchange (albeit, one-way) involving Burger King and Wendy's.

If you've been paying attention to recent fast-food commercials, you'll notice a lot more "4 for $4" deals. I believe it was started by Wendy's and, considering its proliferation, it's been a successful campaign. Burger King decided to up the ante and started to offer a "5 for $4" deal.


Being the country of one-upping another (see: number of blades per razor cartridge), someone asked if Wendy's would respond: 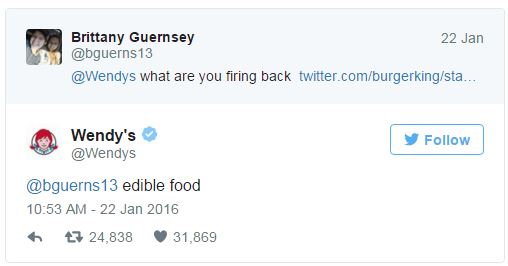