With CES in full swing and the recent pre-sales launch for Oculus, it got me thinking about the Technology Adoption Lifecycle and the apparent shift in the bell curve.

For those who are unaware, the Technology Adoption Lifecycle is a rough outline of how the consumer market buys into or "adopts" a specific technology.

Here is a simple version of it: 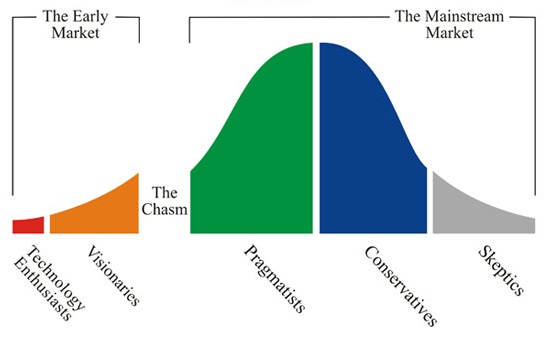 The x-axis is time and the y-axis is adoption rate. You don't have to be too familiar with it, but the significant portions are:
- Early Market: where the so-called Early Adopters are and where products are tested for market response.
- The Chasm: where most products die because they are unable to make the jump between those interested in the technology and those who are interested in the product as a whole. This is right about where Google Glass is now.
- Mainstream Market: here is where product strive to be and where companies will make money.

Hopefully it is pretty self-explanatory (maybe I'll have another post about it in more depth) but, as an example, recall the iPod and the portable MP3 player market.
Initially, there was reluctance to purchasing them over the existing technologies like the Walkman or portable CD player (Discman). There were a few Early Market buyers and sellers, but the majority of people did not purchase one until the launch of the iPod. Apple was able to jump the Chasm; through successful marketing and design and, in particular, the iTunes music store; and made MP3 players mainstream.

A Shift in the Curve

Historically, most product followed this conventional, normal bell curve. However, I think this is starting to shift to the left.
More and more people are being drawn to the allure of being considered an "Early Adopter" for a number of reasons, the biggest effects coming from: social media, crowdfunding, and company relationships.

While I don't want to go on for too long, I'll go into a bit more detail on each of these effects:

The effects of social media have been noted to exhaustion, but I think it is important to mention its effect here.
With the popularity of social media and everyone being constantly "connected", has led to the proliferation of the Fear Of Missing Out (FOMO) and greater societal value in being a member of the earlier categories. Enthusiasts are still relatively small, but there is a rush towards being considered an Early Adopter (Visionary or early Pragmatist).
Much like a music snob bragging/complaining about their indie bands that hitting the Top 40 stations, being the first of your friends to own a product before it "got big" is incentive enough for some to buy in.

Crowdfunding: Company "Ownership" for All

Barely anyone has taken advantage of the new SEC rules on equity crowdfunding (for various reasons), but millions have participated in funding initiatives from $5 tchotchkes to feature length movies.
While these people are, in essence, simply customers for new product launches; the act of doing so in a public forum, along with hundreds of others (again, a fear of exclusion), creates a sense of ownership in the process. The desire to be a part of the process and the appearance (real or not) of having an effect on a company's success drives many to participate. Which leads us to...

People, specifically younger demographics, do not just buy products as a one-off. More and more, they are buying into the company's and products' stories and culture. They want to build a relationship with the company and are more likely to invest emotionally with the brand. Again, this is derived from social media and crowdfunding.
Social media allows for greater engagement between brands and customers. Whereas traditional marketing was a one-directional flow, brands need to both talk and listen to be effective.
The rise of crowdfunding as a way to launch companies has enabled consumers to be on the "ground floor" and see a company's development like never before. With constant updates, you are able to witness the founders' struggles through development and manufacturing, as well as their triumphs upon delivery.

All of this culminates in creating a vibrant market for entrepreneurs and new business owners.
There are many more early adopters to test a proof-of-concept and sustain a company much deeper through the Chasm. This results in many more new companies and products being launched, which is better for the overall market.

However, I wonder if this is just producing a higher number of one-hit wonders and how many companies will actually become sustainable in the long run.

Hopefully I'll get to posting something more extensive about Technology Adoption Lifecycle as it is really interesting, but here's another chart I found that aligns it with the "Hype Cycle":
In this example, I think the amplitude of the "Peak of Inflated Expectation" is greatly increased; the effect of which draws more people to the left in the Adoption Lifecycle.


Another interesting elaboration on Adoption Lifecycle is the addition of fanciful terms like the "Bowling Alley" and "Tornado" which help to explain the phenomena that occur during each of the stages: