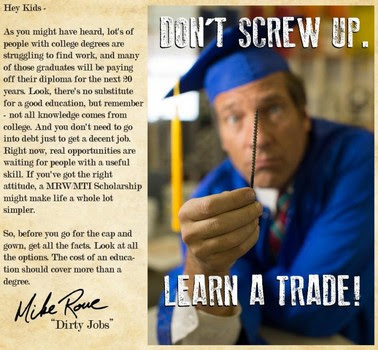 I was reading Mike Rowe's recent Facebook post criticizing a Bernie Sander's tweet that suggested there were only two options for developing citizens: Go to college or you'll end up in jail.

Here's a snippet, but definitely read the full post.


Bernie Sanders tweets, “At the end of the day, providing a path to go to college is a helluva lot cheaper than putting people on a path to jail.”

I wonder sometimes, if the best way to question the increasingly dangerous idea that a college education is the best path for the most people, is to stop fighting the sentiment directly, and simply shine a light on the knuckleheads who continue to perpetuate this nonsense. This latest tweet from Bernie Sanders is a prime example. In less than 140 characters, he’s managed to imply that a path to prison is the most likely alternative to a path to college. Pardon my acronym, but...WTF!?

Historically, universities have promoted themselves at the expense of many other forms of “alternative education.” The implicit suggestion, reinforced daily by a generation of well-intended guidance counselors and misguided parents, is always the same - get yourself a four-year degree, or accept one of the many “vocational consolation prizes” that result from all other forms of “lesser knowledge.” (Mike Rowe)


He goes on to reiterate the fact that many people should not be going to college just for the sake of having a degree, but should explore the potential of trade schools and other skilled positions.

Obviously, that post wasn't very popular with proponents of the "everyone should go to college" school of thought or the Bernie Sanders crowd.

Rowe posted a follow up post defending his, which I think is even more admirable in an age where most public figures fold under pressure and scrutiny of the masses (wrong or right); and he goes on to tell his personal story of higher education:
(Again, just an excerpt of the full post that you should read).


Back in 1980, my high-school guidance counselor told me the local community college was “beneath my potential.” Mr. Dunbar wanted me to apply at James Madison or Penn State. He said a two-year school would put me on the wrong path, and lead to a life of “wrench-turning.” He then pointed to this poster, part of the “Push for College” campaign in the late seventies, hanging on his office wall. “Which one of these guys do you want to be, Mike?” I still remember the caption on the poster - “Work Smart, Not Hard.”

My decision was easy. Even with my parents help, there was no way I could afford a four-year school. I didn’t qualify for any kind of scholarship, and there was no outside financial aid. But even if there had been, I was not a good candidate for a loan. I was just 18, for crying out loud. I didn’t know my ass from a hot rock, much less what I wanted to major in. So, I stuck to my plan. I spent the next two years at Essex Community College. There, I took dozens of unrelated courses, and started to get a sense of what I wanted to do. (At $26 a credit, I could afford to be wrong.)

Eventually, I earned an AA degree. A few years later, when I had saved some money, I transferred my credits to Towson State, and with my parents help, got a BA in Communications. Total cost for all of it? Less than $10,000. Point is, I was able to start working in my chosen field at 23, free from the crushing weight of a student loan. (Mike Rowe)


While I fully believe that education is a key to success, I don't believe that "Education" (the institution) or "higher education" is necessarily the only way people become educated and can pursue a successful career. I share Rowe's advocacy for more people to pursue work in "skilled labor" (welders, electricians, machinists, etc.).

Not only do these jobs also require months and/or years of training to become experts (or even simply proficient) in their field, but because of the shortage of workers, they also pay well. (On average, they earn more than $15/hour... Whaddaya know?)

There is no shortage of articles that outline this problem and, if the trend continues, things will only get worse as Baby Boomers age and the next generation of college-aspirants continue to neglect trade schools.