Originally, I had wanted to include this train of thought in my previous post, but I'm trying to cut down on the length of each post.

Anyway, as I was thinking about Mike Rowe's post criticizing Bernie Sander's calls for free college and about other eloquent posts by the former opera singer (yes, you read that right), I started to compare him to our current candidates for president. All the choices, on either side of the aisle, seem terrible (and generally the same if you actually look at their positions); so I began to wonder, why couldn't Mike Rowe (or people like him) run and win the race for the presidency? 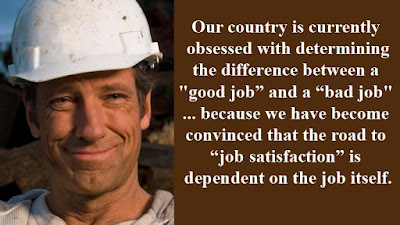 Of course, it comes down to the fact that Mike Rowe doesn't want to run for president. Next came the realization that there are probably hundreds of people who would be "qualified" to be president and be excellent ones at that, but they don't want to run. Why?

Unfortunately, I think most of these people have also reached a certain enlightenment about this country, the political process, and the bureaucracy that makes even the simplest thing take twice as long and cost ten times as much as it should. As government continues to punish the rich and successful with higher taxes and regulations, there will be increasing talks of successful entrepreneurs and industrialists "Going Galt".

For those that aren't familiar, the phrase is derived from Ayn Rand's momentous book, Atlas Shrugged. (If you have not read it, I highly recommend doing so. Named after the protagonist, John Galt, "Going Galt" refers to the self-exile of many of the successful "movers" of the U.S. (and world), removing themselves and their beneficial contributions from the economic system and greater society. Imagine people like Elon Musk, Bill Gates, Mark Zuckerberg, Warren Buffett, Peter Thiel, Oprah Winfrey, Jeff Bezos, Larry Page, Sergey Brin; all disappearing and taking with them their knowledge, influence, and ambition.

While that full scenario seems unlikely, I would argue that it has manifested itself in other ways already. These people have purposely avoided the political system and are fabricating their own world, technically within the physical borders of the US, but only just barely in its bureaucratic grasps. Gates, Buffett and Zuckerberg have all pledged to donate the bulk of their wealth at the end of their lives, but have all ensured that it would not be impacted by the influence of government or politics.

Even the average citizen is doing their best to interact with government as little as possible while still creating great societal value in the form of products, services, and philanthropy.

So rather than the fear of losing our best and brightest of Going Galt, I believe it's already started and most have already Gone Galt.